How Do You Choose a Toothbrush?

Background and History of the Toothbrush

The first manufactured brush was invented in an eighteenth century prison by a prisoner named William Addis. He used a bone with bristles passed through holes drilled in the bone. He eventually prospered by selling his invention. An early method of brushing was developed in the 1940’s by a Mississippi physician named Charles C. Bass, (who also introduced Nylon floss). He recommended turning the bristles towards the gum at a 45 degree angle and vibrating the bristles. The modified Bass adds a circular movement, and the Roll technique rolls down over the gums.

As basics as tooth brushing is, many of us have not had the best start, or, like in math class, maybe didn’t listen as well as we needed to, so for the record here are the main points about tooth brushing you should know.

The brush is designed to sweep away the food, stain, and soft bacteria that grow every minute in the mouth around the teeth and under the gums. After a day or two, the soft bacteria hardens, and then brushing can’t remove these deposits (called tartar or calculus), and a hygienist or dentist must remove them. If not removed, gum disease begins with reversible gingivitis and then progresses to damaging periodontal disease. This sets the stage for severe illnesses like Alzheimer’s, cancer and heart disease, so the better you brush away the bacteria, the healthier you stay. 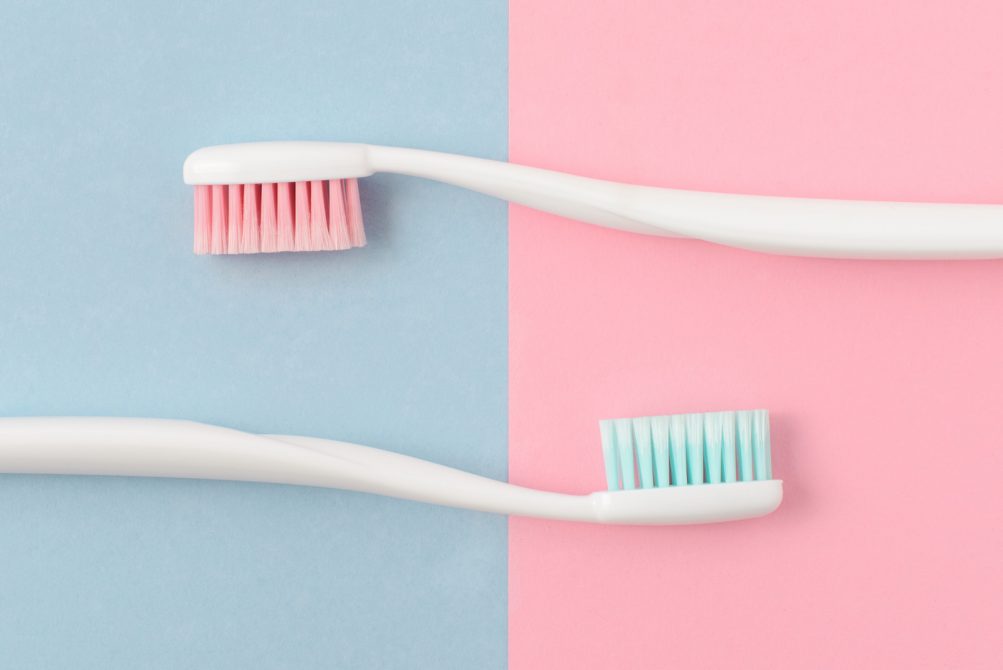 First, the bristles have to be soft and flexible, too hard, and they will not clean the cervices where the bacteria linger. A hard brush can damage teeth over time, so although you might think a hard brush is better, it does damage and does not clean as well. Synthetic bristles are preferred over natural ones since they are more resistant to bacteria accumulation, dry faster; the ends are rounded and not scratchy, are more durable and maintain their shape longer than natural ones.

Then the bristles have to be moved around the teeth up to 5 minutes around the whole mouth to do an effective job. Since most people spend only 30 seconds, an electric brush will do the same job in much less time. Oral B and Sonicare are two representative brands that are very effective. These small head toothbrushes reach more effectively around back teeth, on the inside of the lower teeth, and in hard to reach areas for smaller mouths.

How to Brush Your Teeth

As long as you make sure every tooth is brushed every time, you are doing well. Watch yourself brush in the mirror to make sure you reach all areas, and since most people don’t brush the inside as well as the outside brush the inside surfaces first. Then if you are right handed, you probably spend more time brushing the right side than the left. So reverse and brush the left side first, you will still brush the right side with equal vigor.

Brush 3, or at least 2 times per day, after meals, especially on chewing surfaces and between teeth. Also brush the back of your tongue to reduce the bacterial deposits that grow there, and swipe the inside of your cheeks as well.

Replace the brush or head before they worn or frayed about every 3 months or after you have a cold or illness. If you can, have two brushes and alternate them daily, rinse after use, tap dry, and store where the brush can air dry.

Since brushing can reach only 1 to 2 mm under the gums at best, if the spaces between your teeth and gums are longer than 4 mm, speak to us about shrinking those deep spots so you can clean them daily, and prevent gum infections.

Our office not only smells clean and fresh but is a safe haven as well. Since March 2000,…
END_OF_DOCUMENT_TOKEN_TO_BE_REPLACED

Its great that we are ready to celebrate a new year and a new beginning. To make sure…
END_OF_DOCUMENT_TOKEN_TO_BE_REPLACED

Tweak your Thanksgiving with Teeth-Friendly Foods Turkey What we Like: Protein power packed with every bite. What we…
END_OF_DOCUMENT_TOKEN_TO_BE_REPLACED

What is wonderful is that diabetes and oral problems are controllable.
END_OF_DOCUMENT_TOKEN_TO_BE_REPLACED

Good tooth and gum care are the key to reducing plaque.
END_OF_DOCUMENT_TOKEN_TO_BE_REPLACED